As a distributed team, it’s a pretty critical piece of our tech stack that helps us stay connected and collaborating on a day-to-day basis.

It pings us when our team members need our assistance and input on tasks and projects. It notifies us when changes happen in the other apps in our tech stack. And it lets us know when our next video call is about to begin. And of course, we’re far from alone on this.

But also like a lot of other teams, we’ve been feeling the constant hum of digital distraction. We started questioning whether we’re really using Slack productively as a team and as individuals. Are all those pings and notifications throughout our digital workdays as helpful as we think they are, or are they creating a whole lot of noise and delaying us from doing the real work?

We decided to find out by doing an audit and workshop around our team’s Slack usage—really examine how the app punctuates our digital workdays. And through our research, surveying our team’s sentiment around the platform and actually measuring our usage data, something quickly became clear.

While it’s an important tool for us, Slack can also completely undermine productivity and contribute to feelings of burnout if it's not used intentionally.

Our goal became to find our team’s optimal Slack usage—our sweet spot between quick collaboration and focused productivity so we could work smarter, not harder, to improve output and reduce stress in the process.

First, I want to lay the groundwork by sharing what our team's Slack environment looked like before we started our audit.

Going into this audit, our team had a workshop and survey to openly discuss some of our feelings and observations about our Slack usage. Here’s are a few of the things that came up:

We may or may not be a good representation of other teams, but in the spirit of transparency, that’s where our team started. And from there, we began measuring our Slack usage.

If you’re unfamiliar with Produce8 , it’s a digital work analytics platform that’s core purpose right now is to help teams better understand how they’re using their technology. So we had the perfect use-case to test it out on our own team.

Over a two-week period, we all agreed to remain status-quo when it came to our Slack usage. We did our best to use the platform as we previously had and avoid making any setting changes—we wanted to really capture an accurate representation of our starting point.

Here’s a glimpse at what two weeks of Slack usage data looked like for some of our team members. Each purple dot represents a separate Slack interaction, and we’ve layered them on top of one another to show the highest usage periods throughout the day. 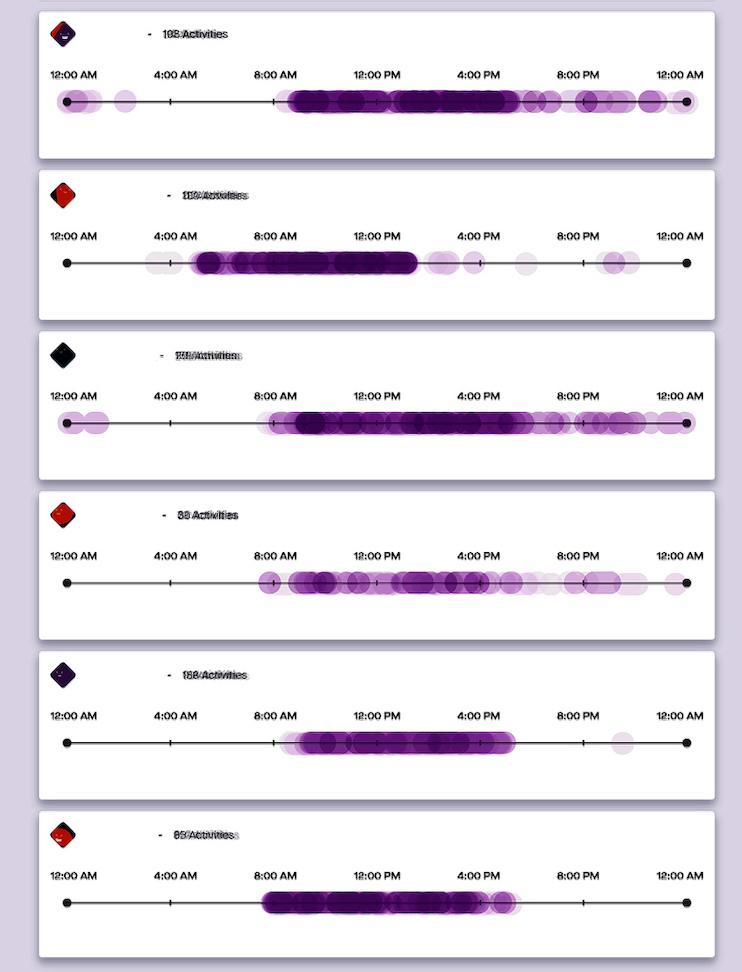 It’s a neat view of our Slack usage patterns. You can clearly see the difference in work start and end times, and it’s interesting to see how some people use Slack in a concentrated way for a shorter period of time while others use it more infrequently but over a longer period of time.

But let’s dig a little deeper.

The results of our team’s Slack audit

Here’s what we found when we measured our team’s Slack usage for a two-week period.

We also made a couple other observations we think are important.

It’s also very worth noting this audit was based on our team’s Slack web-app usage only—we didn’t include mobile app usage this time around. Average interactions, average daily usage and the frequency of after-hours usage would only increase if we were to include that in future measurements.

Once we had the data, it was time to have some conversations about what it all meant.

“We started this audit to look at productivity and well-being in our teams," said our Director of Engineering, Geoff Affleck.

"The data we found was very helpful in evaluating our teams’ ability to focus and disconnect, which are critical to having productive working hours and relaxing non-working hours. I really look forward to testing out some Slack usage changes next and seeing what results we can measure with Produce8.”

Based on the data, we knew we had a distraction problem that was spanning our entire workday, every day. We also knew no one on the team was getting enough time for undisrupted focus work. And from our initial survey, we knew our team members were finding it difficult to know which Slack messages and notifications were worth taking a pause for and which weren’t.

When should synchronous work take priority over asynchronous?

Our team collectively decided to make the following changes:

2. We adjusted our standard operating procedures for Slack response times.

With our new Slack usage changes and setting agreements in place, our team forged on.

What happened when we changed our team’s Slack usage rules and settings?

I really want to tell you the changes we made had an immediate and dramatic positive impact. But the truth is, they didn’t. Not to our Slack usage patterns, anyways.

When we compared our Slack-usage heat maps from the first audit and the second audit, they looked pretty darn similar. You could even argue the second audit looked busier—and you might be right. Overall, we didn’t see any noticeable changes to our usage patterns. 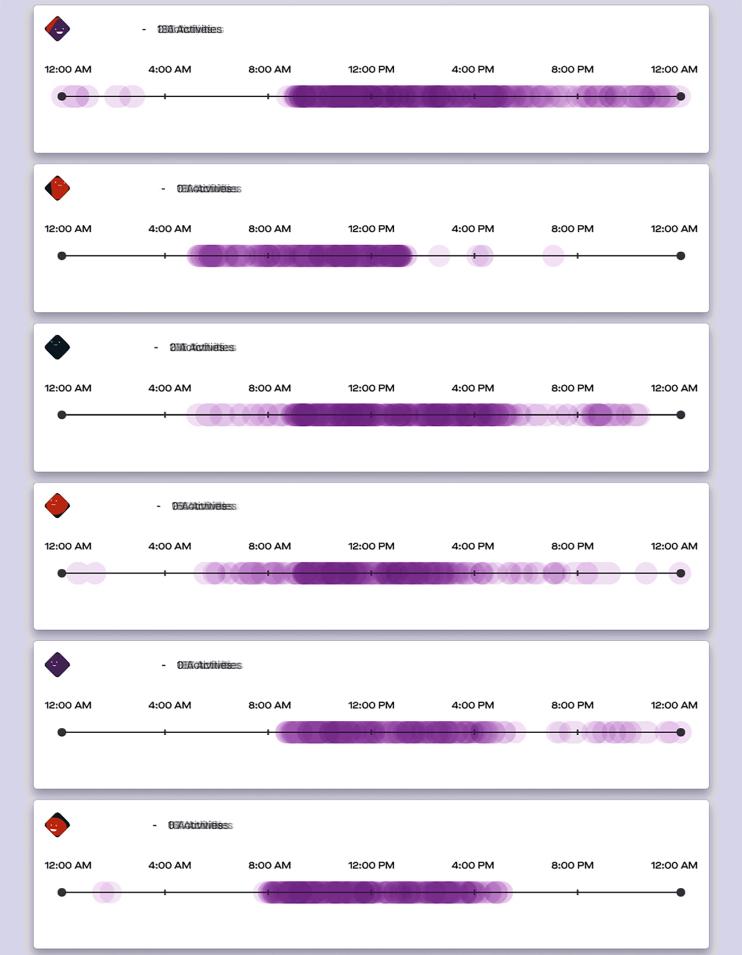 While these results were a little frustrating, there were some very real explanations.

The survey we ran after our second audit also gave us some interesting feedback that showed, while our usage patterns remained fairly consistent, our new usage changes and agreements made us feel less distracted and better able to get focus time.

These survey findings led us to conclude we're on to something with team agreements for Slack to reduce distraction and stress, but we didn't quite nail it.

Here’s what some of our team members had to say:

“I enjoy the lack of distraction and getting drawn into Slack for notifications that weren't important. However, I often feel slow to reply to important messages and worry I'm slowing people down.”

“It's more difficult to get a hold of people now, but I'm getting more focus time and less distraction from Slack.”

And another team member said:

Clearly there was some contradiction between the measured data and how people said they felt about the changes we made to our Slack usage. So we were getting somewhere. Just not where we wanted to be—yet.

At this point, we still felt the goal was to land on some clear, team-wide agreements for Slack usage to remove any uncertainty, stress and distraction.

But, we also agreed we couldn’t go so heavy on rules around usage. This seems to undermine our ability to use our individual best judgement to ask for help when needed—and receive it.

Taking what we learned from our first two audits, our team made some new changes to how we use Slack:

1. Our synchronous and asynchronous work times have become less rigid.

2. We’re no longer muting all notifications outside of synchronous work hours.

We’re currently working using the parameters above. Stay tuned to find out whether we’re heading in the right direction!

While we haven’t quite cracked the nut on our team’s optional Slack productivity just yet, our team of distributed digital workers is getting closer. We’ve also been learning a lot from the two Slack usage audits we've run so far.

We’re also learning a ton about our product and the various features and functionality that will be useful for helping teams perform their own audits—be it Slack, another communications or collaboration platform, or even their entire technology stack.

We want to make it as easy as possible for teams to spot trends in their work data so that changes can be made, impact can be measured and verified, and teams can start working better together.

Start auditing your apps and be among the first to create a more open and transparent digital work environment for you and your team with Produce8.
Register Now

Never miss an update from us. Join our community of business leaders and professionals navigating work and life in the digital-first era.

We're looking for high-performing teams of people who want to work even better together.