“The more research I do around running a 4-day workweek, the more it becomes clear that the organizations that succeed don't compromise at all when it comes to work output,” said Marcus Stein, Produce8’s Customer Success Manager and the person leading us along our journey toward a 4-day workweek .

In other words, they put a lot of pressure on themselves to make sure when they move from five days to four, they're cutting time from stuff that's not important rather than the stuff that determines their success.

So when we started talking about this work initiative for our own team, there was a caveat. If we couldn’t perform at our current level of productivity—or better—then the 4-day workweek might not work for our organization just yet. Adjustment time was ok, of course, but it should happen as quickly as possible.

“Even the biggest advocates of the 4 day workweek model—those who are 100% convinced this works and have done it with many organizations—say if this doesn’t work for you, stop, rethink it, and start it again,” said Stein.

Our goal was to design a highly efficient 4-day workweek. And our team knew we wouldn’t be able to simply drop from working five days a week down to four days and expect the same level of productivity without any effort. Yours shouldn’t, either.

But figuring out exactly what kinds of effort were needed to maintain our productivity—while also enjoying the tangible and intangible benefits of being on the clock for fewer hours—has proved to be our greatest challenge and has led to our best lessons learned.

“I think it's all about understanding what drives success for your organization or role, and then being incredibly deliberate about prioritizing your team's time so that, number one, you stay focused on the things that are most important and that drive your business forward. And number two, you are relentless about identifying and deprioritizing or stopping the stuff that's unnecessary or doesn't drive your success.”

The importance of focus time analysis

Prior to beginning our 4-day workweek journey, we decided to do a focus time analysis on our entire team. What is that, exactly? It was a process of visualizing our workdays through our technology usage so we could see:

We wanted to see how our technology usage habits and patterns were impacting our workdays and our productivity so we could start making some positive changes. And by learning how to work more efficiently in less time, we could ultimately work fewer hours over the long term.

Step one was analyzing our team’s Slack usage. We knew this was an app we were using every day, all day, so it felt like a great place to start.

Read the full details of our team’s Slack usage audit.

We uncovered some problematic usage patterns. So, we started making changes and eventually landed on some better work patterns and app settings.

While we enabled notifications for direct mentions so that nothing important was missed, we also did the following:

What happened when we re-analyzed the data?

With fewer notifications popping up and ringing in our ears, a couple of things happened.

Saving this amount of time and effort on our key remote teamwork communications app meant one other important thing, too. By reducing our interactions with Slack, we were also reducing the number of context switches we performed each day.

According to research, every time we context switch, we can lose up to 23 minutes of time in the process. And when we looked at our technology usage patterns, we began to see longer stretches of time spent in single apps, as opposed to continual back-and-forth app usage.

We were making some good progress as a team! But also, it’s giving us a lot to think about in terms of our product development and some added features around this we could provide to our users in the future.

Friday is a new kind of day

Since we began our 4-day workweek journey, we were reluctant to enforce any strict guidelines around this being a 32-hour workweek.

But we certainly were working toward 32 hours through analysis and productivity hacks.

“We're encouraging our team members to work shorter hours if they can get their work done on time, and we're focusing hard on improving our planning and prioritization,” said Stein.

“That leaves Fridays open to the best judgment of individuals and teams. And we've been deliberate about frequent retros to hold ourselves accountable for making progress towards our goal of working reduced hours without a reduction in output.”

As a result of everything above, we’ve had numerous discussions as a team about what kind of day Friday should be.

We’ve decided to think of Fridays as a third kind of day. It’s not a weekday, but it’s not a weekend day either. It’s a focus day.

“Some Fridays I didn’t work at all. Some Fridays I worked 4 hours. And some Fridays I did a full 8. If you have stuff to do, it’s a great day to do it. But in general, you have the time to do the things you want to do without distractions,” noted one of our team members.

And having that extra bit of freedom and flexibility has certainly had an impact. 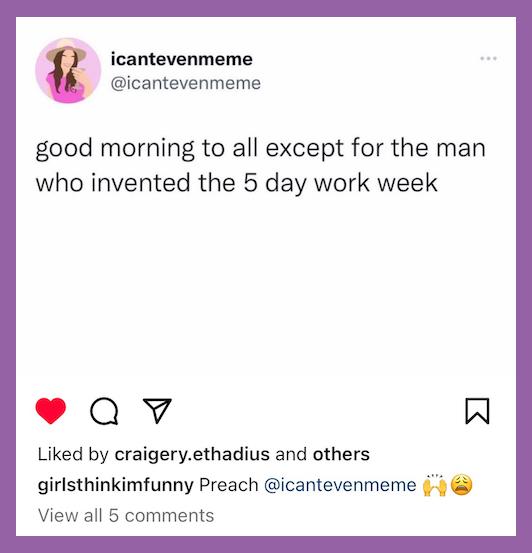 So, how’s it really going?

We’ve had loads of feedback from our team through this process, and no surprise, most of it has been overwhelmingly positive.

“It’s nice to have a day to run errands and have appointments,” said one team member.

Which got us thinking about the time this saves from regular working weekdays. If we can concentrate most of our appointments on a Friday, we could potentially save ourselves a lot of working time over time.

Another team member noted that the weekend now feels like a nice break. In a 5 day workweek, by the time we finish our chores and errands, there often isn’t enough time to fully recharge our batteries.

Several team members said they noticed themselves looking forward to the week ahead more than ever before because they felt rested and ready to take it on. One team member even admitted they were feeling close to burnout before we began this pilot. But that feeling has gone away.

And our newest employee who came from a Slack-heavy company where they continually had to be hyper-aware of what was happening on the platform has felt a positive mental shift and a notable decrease in stress.

All of these positives, in addition to more free space in the day to actually think and get work done, have been huge in terms of both productivity and mental well-being for our team.

But of course, it hasn’t all been rosy.

One thing our team has noticed through this process is that to really understand whether we’re maintaining or even exceeding our productivity levels of the past, we need to establish clearer and more objective metrics of success. How do we measure our work outputs in a week?

Several team members admitted to feeling some anxiety around whether or not they’d done enough to take Friday off each week.

This created a self-driven productivity anxiety that we feel could be alleviated in the future by more solid metrics and KPIs—a work in progress for a pre-revenue startup like ours.

There was also an important discussion about setting and maintaining firm deadlines and ensuring output accountability.

“How do we as a team get better at refining accurate and realistic requirements that don't end up falling prey to things like scope creep and other unforeseen changes that mean those requirements change?” said one team member.

In other words, we want to get better at assessing our workweeks and knowing that we’ve accomplished everything we set out to do.

The future of our 4-day workweek

Our original plan at the beginning of this was to run our 4-day workweek pilot for the summer months. We’d take our lessons learned and determine whether this was something we could carry into the fall.

While that hasn’t exactly changed, we’ve added an exciting new dimension to this journey.

Our company recently started collaborating with 4 Day Week Global —a not-for-profit organization dedicated to sharing the well-documented benefits of a shortened workweek and supporting companies that want to get involved.

Not only will we be joining the organization on a 6-month guided 4-day workweek pilot starting this October, but also we’re offering the use of our product to other companies involved in the pilot. We’re here to give them a better understanding of what their teams’ workdays look like from a technology usage perspective so that they too can make positive work pattern changes.

If you're interested in using Produce8 to support your 4 day workweek pilot, join our Early Access program!
Join Now

We’re excited to keep this journey going and to see how we can help other companies succeed in their own efforts to achieve the same or more success while giving their people more time to do the things they want in life.

Stay tuned for more on our journey toward a 4-day workweek.

Never miss an update from us. Join our community of business leaders and professionals navigating work and life in the digital-first era.

Understanding the Leading and Lagging Indicators of Employee Burnout

How to Overcome Remote Work Distractions With Digital Work Analytics

We're looking for high-performing teams of people who want to work even better together.